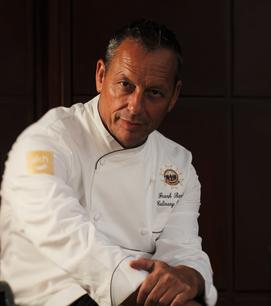 Frank inherited his passion for good food from his Italian family, although he grew up in the many hotels and restaurants that his father managed up and down the UK. The Bordoni family come from an area south east of Rome, in the foothills of the Frascati Mountains and it is there that Frank learned so much about food and ingredients. At only 19 years of age, Frank was awarded his first AA Rosette, leading him to develop his career  in the best respected and finest rosette and Michelin starred establishments in the country.

Bordoni’s love of healthy and high quality food led to him championing organic food and later to be regarded as the UK’s leading authority on cooking with organic food.  An advocate of "you are what you eat" and his determination to bring his message across, led to him collaborating on many media, industry and corporate projects, earning him the nickname 'The Body' Bordoni by Celebrity Chef Anthony Worrall Thompson.  More recently Frank has been vital in introducing and promoting organic produce both in Europe and the Middle East, working with suppliers, government  organisations, charities, companies and chefs.

FRANK BORDONI IN THE PRESS

​Frank has also been a star of the small screen both in the UK and internationally as a TV chef, presenter, Judge and Mentor.  He has appeared on Michael Van Straten’s BODY TALK and was a regular on GRANADA BREEZE, CARLTON FOOD NETWORK, SATURDAY KITCHEN, DAILY COOKS, GMTV and BBC GOOD FOOD LIVE, as well as many guest appearances on SKY and CHANNEL 4. As an accomplished writer and Member of the Guild of Food Writers, Frank has worked with MEN'S HEALTH, WOMEN'S HEALTH, OK! , The DAILY and SUNDAY EXPRESS and books such as HOTEL CHOCOLAT, SATURDAY KITCHEN COOKBOOK and published his own book on Italian cookery called MAMMA MIA!

Having excelled in many competitions over his career Frank is invited to work with many organisations such as the COOKERY & FOOD ASSOCIATION, CRAFT GUILD OF CHEFS, MASTER CHEFS OF GREAT BRITAIN, WORLD ASSOCIATION OF MASTER CHEF SOCIETIES and was made World Vice President of the WORLD MASTER CHEFS SOCIETY. Frank has also judged for the iTQi Awards in Brussels and is invited all over the world as both a judge and ambassador for the industry. In December 2015 Frank led his culinary team to victory in Doha at the Hospitality Qatar 2015 Salon Culiniere where they scooped 6 Gold Medals, 12 Silver Medals, 25 Bronze medals and 3 trophies for highest score.

Today Frank works across Europe and the Middle East as a consultant with offices in both the UK and Dubai, providing high quality expertise, guidance and support to hotels, restaurants and casual dining outlets as well as creating innovative new concepts and F&B solutions.